Many crypto veterans probably still remember Doge well. Because the meme of Shiba Inu shaped the global crypto community like no other Altcoin. Although Doge was originally only meant as a gag, the coin was very popular for donations and tips and had a high fun factor.

Once as parody on the Bitcoin based, the cryptocurrency Dogecoin is now worth two billion US dollar. That says a lot about the industry, says the Dogecoin founder.

Cryptocurrencies: Dogecoin was once already worth nearly two billion Dollars

The hype around cryptocurrencies such as Bitcoin, Ethereum or Monero drives occasionally strange blooms. The onslaught of investors on apparently every kind of coin or token has ensured that the fun currency Dogecoin, which was founded in 2013 as a parody of Bitcoin, has a market capitalization of over two billion dollars, as data from Coinmarketcap shows. The value of a Dogecoin has almost doubled within couple of days at times. On Sunday a Dogecoin was worth up to scarcely 0.02 dollar.

Dogecoin founder Jackson Palmer sees the first signs of market excesses. “The fact that most of the conversations in the media and between people focus only on the potential of an investment is worrying,” Palmer told Coindesk.com. Palmer had left the Dogecoin team in 2015.

The investment hype in the media is diverting attention away from the technology behind it and its original goals, Palmer said. And: The fact that a currency with a dog as its logo, whose team has not published a software update in the past two years, could achieve a market capitalization of over a billion dollars says a lot about the state of the crypto industry. Dogecoin has made it into the top 30 most valuable cryptocurrencies. 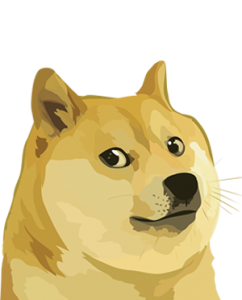 The Dogecoin’s dog logo shows the Japanese Shiba Inu dog Kabosu, who became an Internetmeme in 2010 and has been sniffing around the net ever since. Like Litecoin Scrypt, Dogecoin uses Scrypt for its proof-of-work algorithm. But unlike Litecoin and other crypto currencies, Dogecoins has no limit. Since 2015, 5.2 billion new Dogecoins are expected to be added each year. According to the coin market cap, 112 billion coins are currently in circulation.

In fact, the Doge course reaches a peak every year, usually accompanied by an extremely steep rise, which is followed by a complete correction. This is repeated with such regularity that many traders buy DOGE when it slides into a certain price zone.

But in the end, the cycle took its time and Dogecoin lingered in a longer sideways movement. The day before yesterday, a rally then began, which has already undergone a partial correction. The question now is whether the powder has already run out or whether the rally can continue.

DOGE founder has turned away

One of Dogecoin’s most prominent founding fathers is Jackson Palmer, who is responsible for product management at Adobe. Originally, Doge was only conceived as a gag to make crypto currencies more easily accessible and propagate.

However, in 2015 Palmer turned his back on Doge and the rest of the crypto community. Thus, he went from being a proponent to one of the biggest critics who no longer deals with the topic at all.

All the more surprising that Doge nevertheless manages to return to cycles again and again. But the greatest danger lurks elsewhere.

Hype on TikTok and RobinHood

The latest rally seems to be spurred on by social media as well, with young people on TikTok philosophizing about whether Doge will ever be able to reach the value of one US dollar. In view of the fact that the crypto currency is by definition not limited to a maximum amount, this seems very strange.

So there are in principle infinitely many Dogecoins. With the current amount in circulation of slightly more than 125 billion DOGE, one would have to spend an absurd amount of money to catapult the coin there.

The RobinHood trading platform is also taking its share of this and is enjoying greater popularity, especially in North America. Here DOGE can be traded directly against US dollars. The only hope of the supporters is the distribution of DOGE, because although there is a large quantity, it is not evenly distributed.

This gives speculators reason to hope that in the end not so much money will be needed to drive the price further up. But this also means that the biggest fish in the pond do not flood the market with their coins.

Since Dogecoin is mined in so-called “merged mining”, the biggest hodlers are likely to be larger miners and mining pools. Since the past rallies always resulted in a complete correction, the current hype is interesting, but also dangerous.